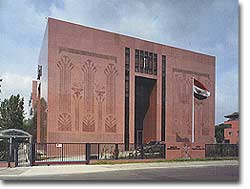 The idea of building an Egyptian Embassy in Berlin dates back to the forties, when two pieces of land were purchased for the purpose of building both an embassy and a residence, one of them on Tiergarten Strasse and the other on Stauffenberg Strasse (current location).

Due to the different well known historical turmoils that characterized the era from the fifties till the eighties, all the Berlin plans were postponed with the majority of the professional focus being transfered to the capital / Bonn except for a small representation office in Berlin.

With the unification of the two Germanys in August 1990 followed by declared steps to transfer the capital from Bonn to Berlin, several tangible steps were taken by the Egyptian Government to cope with this transfer. The 1st step was to sell the piece of land located on Tiergarten Strasse in 1989 and re-use the money in financing the building of a new Embassy on Stauffenberg Strasse.

After the completion of the designs, agreements and transfer processes by the end of 1999, the construction contract was assigned to one of the most famous German Construction Companies “ Dywidag “ which started its construction works in the year (2000 ) with a deadline of October (2001).

Parallel to all those implemented steps in Berlin, similar ones were on track in Bonn to start the process of transferring the Embassy from Bonn to Berlin .

During this transitional period, the Egyptian Embassy used its former East Berlin premises for diplomatic representation and consular activities, and leased a house in Charlottenburg for the residency of the Ambassador.

The construction of the current embassy building was terminated in the beginning of October 2001, and started un-officially operating in mid October. Till now the Embassy has not been officially inaugurated.

Concept of the Design

The new Egyptian Embassy in Berlin, stands high with its unique and peculiar design that mixes between history and modernism, close to the Spree River in its current distinguished Embassy Row location on Stauffenberg Strasse in the central downtown district of Tiergarten, as a strong proof of the great development and prosperity that has been achieved by the sons of the pharoahs, as well as a symbol of the strength and harmony that the Egyptian / German bilateral ties have reached.

The archietectural design of the building is indeed a pride to all Egyptians living in Germany. Designed fully by Egyptian Archietects and built by the hands of German Engineers, the building has grown to become one of the most important archietectural highlights in the central Berlin district of Tiergarten.

In General, the design of the building is a mix between the past and the present, between a seven thousand year old civilization and the accomplishments of the Information Technology.

In fact this mixed design carries in itself several connotations, among the most important of which is confirming our adherence to the Egyptian history, culture, traditions and values, as well as, loyalty to the great river Nile – vis a vis – the side effects of trying to cope with the different requirements of globalization and our continous efforts to reserve a place among the developed nations.

In this context, the main embassy fascade with its brown marble tiles inscribed with Pharaonic encryptions, symbolizes the two Ancient Egyptian Capitals of Upper and Lower Egypt ( Menf / Tiba ) in between which the Nile River ran, Upper Egypt represented by the Papyrus Plant and Lower Egypt by the Lotus. The tacit meaning behind this beautiful fascade is that Egypt has always since the days of the Pharoahs and untill now enjoys endless unity without religious, colour or ethnic discriminations.

Internally, both the luxurious main hall and Atrium of the Embassy – all in white, off grey and sky blue marble - have been designed to resemble the entrance of an old Egyptian Pharaonic Temple with all its pillars wall drawings and encryptions, but with a sense of uptodate look with an entirely modern atrium glass cieling to shed sunlight on the pillars and wall encryptions.

The rather shocking reaction, would come once you cross the atrium area and enter the Multipurpose hall, as it has a totally different look which gives you a rather causy, homey, and enjoyable feeling with all its wooden interior and high tech capabilities that makes it eligible for any kind of event.

The biggest highlight of the embassy however, is the Ambassador’s quarter on the 3rd floor. It is a contrast of beautiful colourful green, yellow and brown Marble together with classical looking wooden interiors and panoes mixed with classic french style chandeliers. Needless to mention, that the Italian furniture in the Ambassadors office was chosen very carefully to match with all these beautiful contrasts of colours that are available in the quarter, to make it just an enjoyable place to work. 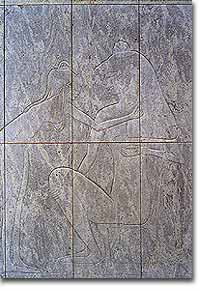 There are two scenes inscribed on the white marble walls of the main atrium area of the embassy, they are:

1- Scene on the left side of the entrance:

Represents a typical day to day scene, of “ Juice Making and production “, which was a job mostly done by ancient Egyptian women. In this scene specifically, women are seen grinding the grapes in the same method it is done these days.

2- Scene on the right side of the entrance:

Represents day to day process of beautifying a woman, before leaving her house in the morning. In this scene is seen a house maid assisting her mistress in arranging her hair and beautifying herself.